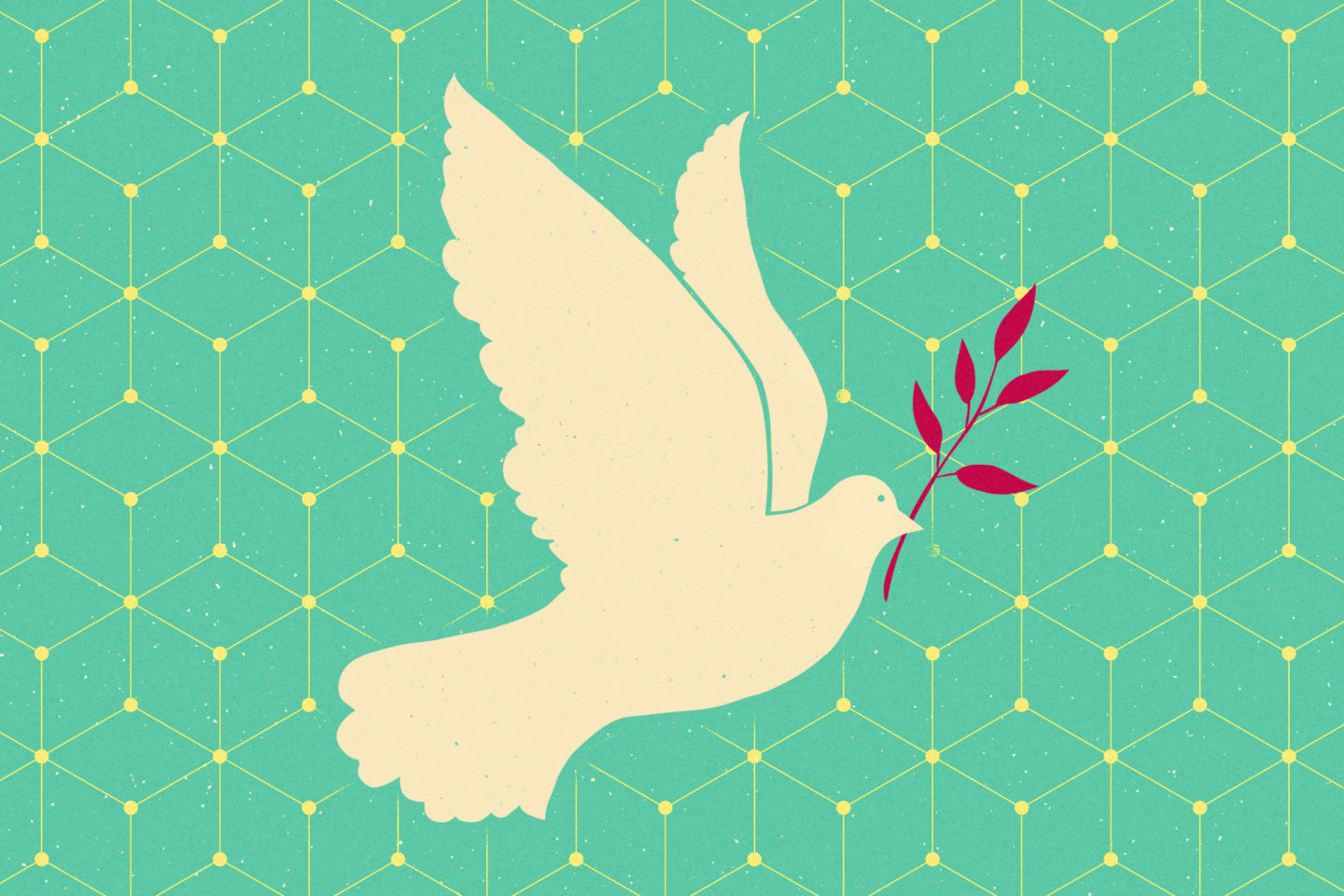 When Aaron Mayer first heard of Bitcoin from his college roommate in 2015, he was instantly taken with it. He says, “I started reading a lot of articles, books, whatever I could get my hands on,” and soon started up a blockchain club on campus. He came to see Bitcoin and the underlying blockchain technology as a tectonic shift, “like the Internet in 1992,” he says, referring to the year that saw the launch of the first widely accessible web browser and the birth of the term surfing the Internet. For Mayer, as a student of ethics who wants to do some actual good in the world, the problem with blockchain “is that a lot of people are using it in a way that is just either boring – which is annoying – or is actively harmful.”

It’s that combination of ethical obligation and devotion to tech that brought Mayer and over 70 others to the Blockchain for Peace hackathon last month in Brooklyn, NY. Hosted by the Bushwick Generator, the event invited participants to collaborate on blockchain-based hacks to make governance more transparent and civic participation more accessible. The Bushwick Generator is itself developing an incubator and co-working space and will be what entrepreneur-in-residence Emerick Patterson calls a “community-influenced building.” Its occupants and community members will set the terms of its growth and use in transparent and distributed ways that reflect principles of blockchain at the core of the projects conceived there.

The blockchain-hackers-for-good brought their ideas to the hackathon to get help and to spend a solid weekend on development, with applications running the gamut from food to politics: YumToken would allow SNAP (aka food stamp) recipients to redeem more vouchers if they shop at local markets instead of big-box stores, and Show Me Your Money would make it easier for voters to track the sources of candidates’ campaign contributions. These and other projects competed for prizes including cash, support from Native Token, and work space at Bushwick Generator. Mayer’s charity donation platform Action Auctions won top spot along with Babl, Gustavo Cepeda’s project that aims to put government spending on the blockchain to increase transparency and accountability.

Cepeda aims to build a platform that will allow anyone to easily to see the government’s public works and infrastructure spending to help combat corruption. He says that “the first time I heard about blockchain, I immediately thought of this idea,” referring to stories of politicians’ misuse of funds in his parents’ home of the Dominican Republic and fraud in the US and elsewhere. Cepeda acknowledges that convincing government, even a small local one, to fundamentally change how it does its business, by transacting and contracting on the blockchain, is no small undertaking. For that reason, he aims to develop a tool that can first prove the concept outside of government with a financial tracking system for construction project management.

Managers of large construction projects may well see the benefit to such a tool, Cepeda believes, because an incorruptible record of transactions could prevent subcontractors from defrauding them by reporting higher than actual costs, for example. If transactions between all parties are made on the same blockchain, securely and distributively, there may be less room for cheating. Cepeda sees this benefit trickling up, saying “hedge funds who invest in real estate would want that transparency when they’re investing and… maybe the SEC would look at that and say, ‘Hey, maybe we should get every company to get on this.’” Cepeda, like many working on blockchain projects, must simultaneously consider how to facilitate adoption of a new and sometimes perplexing system. Babl is just begun, but he believes it will clearly show users – whether stakeholders in the construction project, or citizens of a local government – how money is being spent in a clean and intuitive interface, even if they have no idea what the blockchain is. After all, he says, “you don’t need to know how an engine works to drive a car.”

Mayer’s Action Auctions is all about “harnessing blockchain for social good” by gamifying charity. His platform will run 50/50 auctions where the single largest contributor receives half of the sum donated. He’s already been doing this off the blockchain and has raised over $25,000 for the Against Malaria Foundation. Moving it to the blockchain will prevent auction-runners from colluding with donors to help them get a payout, and will keep donors who don’t win from requesting refunds from credit card companies. If it seems like a cynical way to raise money for a worthy cause, Mayer prefers the term “altruistic coercion.” In the past half an hour, he says, “fifty children have died of malaria – that’s morally indefensible; we should be doing whatever we possibly can to stop that and I’m okay harnessing people’s self-interest.”

Advising Mayer, among others he met at the Bushwick hackathon, are Harvard and Brown game theory experts, who believe the concept is new, and Mayer says they have a patent on the application. He wants it to be the de facto platform for this kind of charitable giving and is working hard with his new team members to bring it to market before anyone else. Action Auctions is not yet incorporated, but may well end up a nonprofit in order to avoid violating gambling restrictions on companies. Inherent to the nature of blockchain’s transparency is another obstacle on Mayer’s path to market: since anyone can look at the ledger, a potential donor could find the exact amount necessary to bid in order to win half the pot. To get around this, Mayer is looking into solutions like Enigma that adds a protocol layer to a blockchain in order to store data (in this case a bid amount) that an application needs to remain private while in operation.

Blockchain has come a long way since being primarily a medium for illicit transactions, and by connecting people interested in working on social and governmental applications of the technology, the Blockchain for Peace hackathon is helping to widen its appeal and audience. In diversifying the applications of blockchain technology and encouraging its use beyond the financial and investment realms, the community of developers and advocates may also evolve. Kiba Gateaux, one of the hackathon’s organizers, noted that over half of the attendees were women, still a rarity in the blockchain wing of the tech world. Events like the hackathon also reveal enthusiasm to leverage decentralized technology for tangible, local uses – quite possibly the places that allow it to go from niche to mainstream.