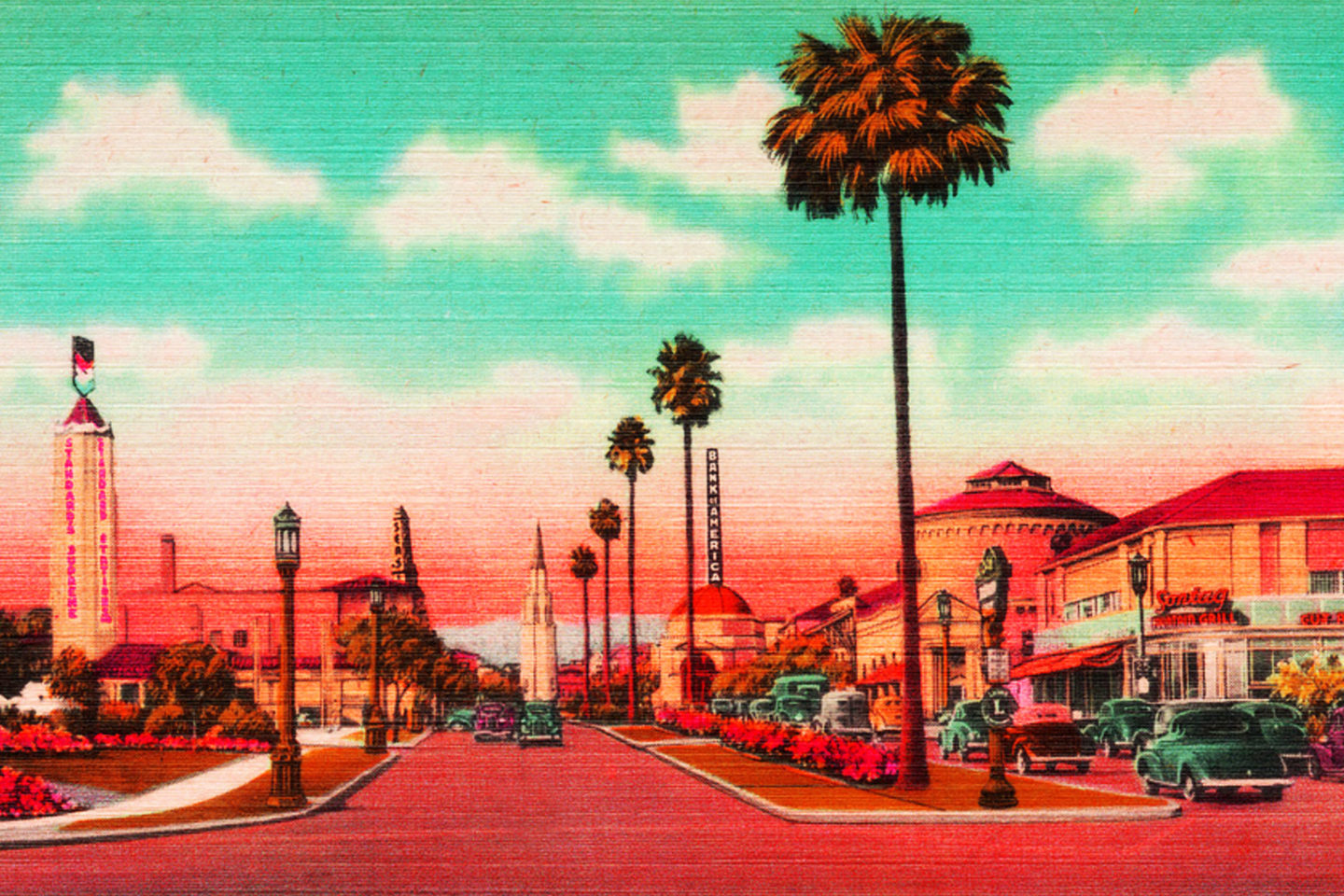 Westwood Village, LA, home of Everipedia (Kevin Durkin for In The Mesh)

There is something quaint about Wikipedia, and not just how its design evokes the Internet’s early years, still ready to load on a dial-up modem. Since 2001, it has plugged away at its mission to make the sum of all human knowledge available to everyone, while the dominant websites that came of age with it have evolved into profit-driven megacorporations. Consistently ranked in the top five most used websites, Wikipedia is the only nonprofit on the list, and you’d have to scroll through at least a hundred more to find the next. And if you haven’t heard anyone complain about the gentrifying force of Wikipedia’s HQ, it’s because its staff is about 0.3% the size of Google’s.

Wikipedia’s lean operations are made possible by the roughly 200,000 editors active at least monthly on the site, and the millions more who poke around here and there, appending, revising, and debating our epistemological frontiers. And they all work for free — I mean, they’re volunteers. Even though we’ve known that the “sharing” economy is a misnomer at least since AirBnb began, and have been compelled to consider even our mindless time on Facebook as labor that ought to be remunerated, we still blithely consume the fruits of Wikipedia editors’ countless hours of uncompensated labor. Perhaps we have once or twice met co-founder Jimmy Wales’ call to donate to the Wikimedia Foundation – the charmingly old school text-only banner twice yearly shaming us, a reminder that winning that argument with your dad wasn’t really your win at all, but belonged to the unnamed, unpaid laborer. But even if we hand over those five bucks, the editors won’t see a dime of it.

Everipedia co-founders Travis Moore and Theodor Forselius, on the other hand, think it’s time those editors did see a dime for all their work – or at least a crypto token. Last month, Everipedia raised $30M and allocated its IQ token on the EOS blockchain to its editors in proportion to the number of edits they had made. Editors have been working primarily on copies of Wikipedia articles, thanks to Wikipedia’s own Creative Commons license. Bots continue to comb through Wikipedia to import edits to Everipedia’s platform (though the bots are still slower than Wikipedia’s editors), and Everipedia’s growing number of editors, currently about 17,000, have written an additional half-million or so articles, making it the largest English-language encyclopedia.

A 2011 survey of Wikipedia’s editors found that the most reported reason for contributing was “the idea of volunteering to share knowledge.” This ethic of volunteerism is at the core of Wikipedia’s self-image as well as our conception of it; along with its non-corporate posture, it helps explain why we perceive it as trustworthy. But we too easily lend the volunteer editor an air of dispassionate objectivity: one rarely chooses to enter a conversation with nothing to say. Apart from the philosophical problem of objectivity, though, Wikipedia has always faced a more tangible one: 90% of its editors are men, mostly white, from Christian-majority countries in the northern hemisphere (a full fifth from the US), and are generally described as white-collar. In this context, “volunteering to share knowledge” can sound a lot like mansplaining.

Over the years Wikipedia has been shown to let wide gaps persist in the coverage of women and people of color in its entries, to use biased language in articles about women, and to be a forum for discrimination against LGBTQ editors. In response, activist groups have organized “edit-a-thons” to recruit more editors among groups historically ignored by the mostly white older men who have accrued authority on the site. Wikipedia has supported these efforts with grants of its own and has made some progress at least in hiring more women, but still hasn’t come close to its goal of having women comprise 25% of its editors, which it had aimed to do by 2015. “It’s been pretty well-researched that women in many communities have less leisure time than men,” Wikimedia’s director of community resources told HuffPost, acknowledging a hurdle that the volunteer format cannot easily overcome.

Everipedia has just launched under its edit-for-pay model and statistics on the racial and gender composition of its editors are not available, but Forselius told Wired, “We’ve tried to focus on getting a lot of female edits, younger editors, and diverse background and ethnicities.” While mobilizing editors with more gender and racial diversity is a common theme in interviews with its founders, Everipedia has an uphill battle of its own given that creators and users of blockchain projects remain mostly white men.

The new encyclopedia is also dropping Wikipedia’s “notability” requirement, a notoriously subjective standard that has perpetuated existing biases and holes in Wikipedia’s coverage. This policy might help it to be more inclusive than the old white guy predecessor, but could also turn it into an encyclopedia of social media, especially since its bar for citations is so low: “Any source is valid, including Twitter, Facebook, Instagram, and LinkedIn.” (This should probably come as no surprise for a team that has said it wants to build the Wikipedia that Mark Zuckerberg would have built, and “to do for knowledge aggregation what Instagram did for photo sharing.”)

Eschewing a requirement for any semblance of typically reliable sources has already earned Everipedia the unfortunate epithets “the Wikipedia for being wrong” and “encyclopedia of errors.” Last year, following the October 1 Mandalay Bay mass shooting in Las Vegas, its editors created a page misidentifying the shooter based on rumors, which they had done a few months earlier after the car attack at the August 12 protests in Charlottesville. While Wales is at work on WikiTribune to provide a “factual and neutral” news service, Everipedia’s interpretation of decentralization as a universally low bar for quality of information means it risks ending up more tabloid than encyclopedia.

Larry Singer, who co-founded Wikipedia with Wales, says it is “sloppy, incomplete,” and left the organization after only a year. When Everipedia started talking about economic incentives and operating on the blockchain, he joined as Chief Information Officer, seeing it as an opportunity to build a truly decentralized “knowledge marketplace.” An icon of early Internet decentralization, Wikipedia has since evolved various hierarchical structures, including administrators and arbitration committees, to adjudicate disputes and censor editors. With pride and badges the only incentives offered to Wikipedia editors, the back room of an article, especially one on a heated topic, often looks more like a bar fight than a library reference desk.

Where Wikipedia relies on a heavily biased group of sometimes partisan rogue editors to resolve conflict over sources and facts in members-only forums, Everipedia opts for that stalwart judge of our neoliberal era: the market. On Everipedia, each edit you make will cost you one of your IQ tokens. If your edits receive a majority of votes by other editors, you get your original tokens back plus a reward – the more who agree with you, the larger the reward. But if the community deems your proposed edits to be bad or untrue, you forfeit the tokens you staked in proposing the edits to begin with, and they go instead to the other editors who voted to keep your bad edits from seeing the light of day. Editors who vote for an edit that turns out to be wrong, which on Everipedia is the same as being in the minority, will see their tokens put on hold; the smaller the minority they’re in (i.e., the more wrong they are), the longer the hold. (Nevermind Ibsen’s warning that the majority is never right.)

This model works well for cases with a clear majority against a bad actor who is obviously wrong, but if Wikipedia serves as any example, disagreements are often much more contentious. What come to be facts are rarely settled easily and an edit usually begets more edits by others, consensus ever nearer but never quite here. Endless revision wasn’t always the approach of online encyclopedias. Wales and Singer intended to create Nupedia, in which volunteer editors would take on some of the grunt work, but experts would make the tough calls and finalize the articles. Turns out there was a lot of enthusiasm among the volunteer editors to continue the work, and we were just as happy to read their articles anyway. Various studies since then have shown that Wikipedia’s process yields articles generally believed (as judged by so-called experts, a bit ironically) to be as accurate as those in the Britannica. Everipedia is banking on its ongoing cycle of editing and token-voting resulting in a similar sort of regression to the truth too.

If Everipedia is able to become an authoritative and comprehensive collection of human knowledge, its team suggests it could solve blockchain’s so-called oracle problem. For smart contracts or financial transactions that require reference to real-world, off-chain information, Everipedia could represent a replica of our world, a matrix for the off-grid world that runs on the blockchain – a futurism fit to unseat those stubborn feelings of nostalgia for Wikipedia. Operating with files stored on a distributed network, there would be no servers to block either, allowing it to survive even where Wikipedia has been successfully blocked by governments. Succeeding would make Everipedia much more valuable than mere encyclopedia: for all the decentralized apps operating on its blockchain network, it would serve as something like reality itself.